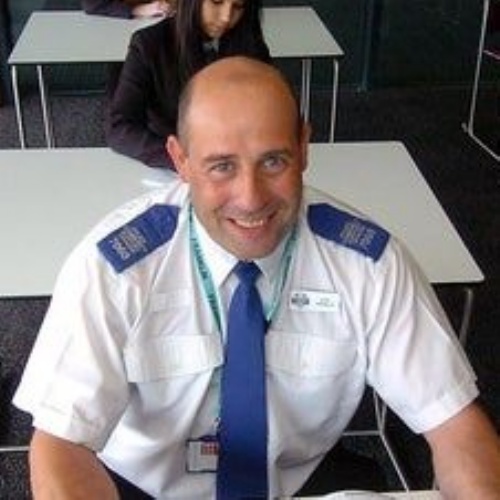 A building at Kettering's Isebrook College has been named after popular PCSO Alex Franklin.

Alex died aged 52 in July, weeks before he was due to become a governor at the special educational needs school in Eastleigh Road.

And today (Friday) an emotional afternoon saw his family, former police colleagues, school staff and pupils watch on as The Franklin Building was officially opened in his memory.

Alex's wife Karen said: "Alex was a very modest man and would never have said he would have deserved this.

"He probably would have wondered what all of the fuss was about.

"He classed it as just doing his job but this is an absolute honour. It's amazing."

The £3.5m building, which has been in use for about a year, includes his collar number 7060 above the door and a plaque in his memory is just inside.

It was funded by Northamptonshire County Council as a response to the lack of special school places and has eight new classrooms and five specialist rooms including a library. Some children had been taught from temporary classrooms but this new building has increased the school's capacity from 130 to 200.

Kevin Latham, executive headteacher and chief executive officer of the Creating Tomorrow Academies Trust which runs the school, said naming the building after Alex was the obvious course of action.

He said: "Alex was a huge support to us and a huge champion of the school.

"He went over and above what was expected of him and we are delighted to name this building after him."

School governor Sandy Cooke said: "The kids saw him as a member of the team. They would go to him with their problems and tell him things.

"Alex would always come in with a smile on his face and whatever message he had for the kids they would take it on board."

He said: "I think this is amazing, Alex was a character who was really positive about helping youths and education.

"It's brilliant to be able to leave a legacy like he did."

Tributes flooded in after Alex's death this summer.

He was well-known as a huge advocate for young people who worked closely with schools and was a strong voice in the town's effort to tackle gang violence amongst teenagers.

He died hours after an incident where he was surrounded by youths but a police review concluded that it was not linked to his death.

- Isebrook SEN College is looking for more governors, who are needed for six meetings a year. Anyone interested in finding out more can call Ellie Edwards on 01536 500030.